First, this particular area of south Texas is called the Rio Grande Valley, more specifically, the Lower Rio Grande Valley.  It is where the Rio Grande River meets the Gulf of Mexico, and is considered one of the most biologically diverse regions in North America, where over 500 species of birds have been documented. During migratory times, species from the Central and Mississippi flyway end up funneling through this region. Plus, many birds from South and Central America reach the northernmost point of their range on the Rio Grande, with some not migrating any farther north.

Additionally, the Valley is where four climates, temperate, desert, coastal and sub-tropical, converge.  This diversity helps support 1,200 plant species, which in turn attracts and supports all these species of birds. It also helps support an abundance of reptiles, mammals and insects, including butterflies, who also migrate through this area.  This is also where a number of photography ranches have been started.

Last year three of my friends, Debby, Eloy, Lance and I went to south Texas for the first time.  We visited two photography ranches, the Santa Clara and Martin Ranches, and at the end of the week we all decided we wanted to return the following year. Our visit last year was in the first half of May, and the weather was a bit cloudy, not real warm, with some rain.  None of which are real good for attracting birds to the waterholes, which is what, for the most part, is what the photography is all about at the ranches. But, having said that, we all still got wonderful images. We asked one of our guides, Hector Astorga, who is the manager and was our guide at the Santa Clara Ranch, when was his favorite time of year.  He said June, because it is usually sunny, no rain, and HOT. These conditions concentrate the wildlife around the waterholes and in front of your cameras. When I returned home, I started looking at dates, for Hector had said he already had many bookings for next year, and we all decided we wanted to return to the Santa Clara Ranch.  Also, I wanted to look at what other ranch we wanted to visit.  I asked around and spoke with a few people and decided on going to the Laguna Seca Ranch.  Now, I had to choose our guide at the Laguna Seca Ranch.  After more networking, I chose Ruth Hoyt.  I called Ruth, for she is also the contact for reservations at the ranch.  We had a great chat, she penciled in our dates, and that was it for 6 months. One of our group, Lance could not make it, so a friend of Eloy's joined us, Carlos.  March of 2014 rolled around and now it was time to send in deposits and find flight reservations for the four of us to McAllen, Texas. Most of the ranches are within an hour of McAllen.  I searched what flights would work for everyone, for one person was already going to be in Houston, the other three, including myself were flying in from Florida, but from three different points of departure.  We had met in Houston last year, then the four of us had flown the same plane to McAllen, but this year that did not seem to want to work.  I wanted us to get into McAllen in time to get to the ranch and have nice afternoon shoot.  I decided that for the three of us coming from Florida, Dallas was going to be the place to meet, then take the same plane to McAllen. So I told the other two from Florida what time they had to be in Dallas, and the person coming from Houston, what time we would be in McAllen.  Within a few days everyone had their flights picked and booked, now enthusiastically awaiting departure in June.  I will put all links of interest at the end of this blog post.


The week before our departure, which was Saturday, June 7th, I contacted everyone to make sure there were no last minute issues.  Everyone said A OK, and boy are we ready!! All of our airline connections worked out just fine.  We met Debby, coming from Houston in McAllen, around 3:30 PM, got our minivan from Hertz and off we went to the Santa Clara Ranch.  We had used a minivan the last visit and it worked a treat for the four of us and our equipment.  At 5:30 PM we were in a blind with our cameras, ready for a terrific week! The Santa Clara Ranch has a VERY nice bunkhouse located within minutes or all the blinds, in fact one of the blinds is within 50 feet of the front door.  It has four bedrooms with two twin beds, two bedrooms sharing one bathroom.  In the middle is a very large family type room that includes dining table and kitchen.  There is wifi, but being satellite, a bit slow.  You can buy your own food and cook yourself, but my philosophy is I AM ON VACATION/PHOTOGRAPHY TRIP, and I do not cook, which is how the others felt, so we picked the option to have the cook and cleaner.  She is a VERY nice lady, who cooks the most splendid Mexican meals.  She is there very early to cook breakfast and when you arrive back after your morning and afternoon shoots, the house smells great. Hector Astorga was again our guide.  He is also an excellent photographer in his own right, who is full of knowledge of the area wildlife and photography. 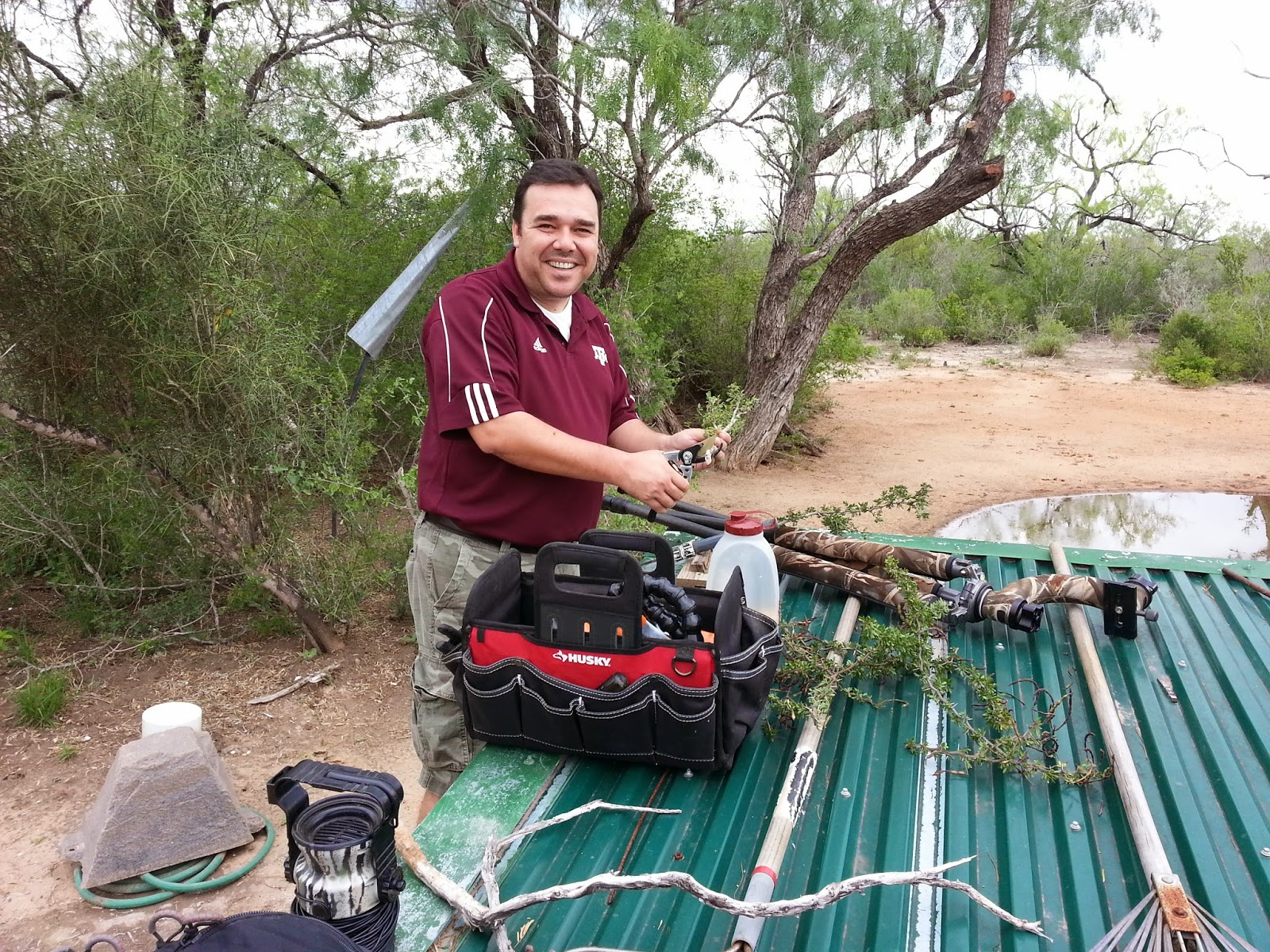 A pic of us at one of the other blinds 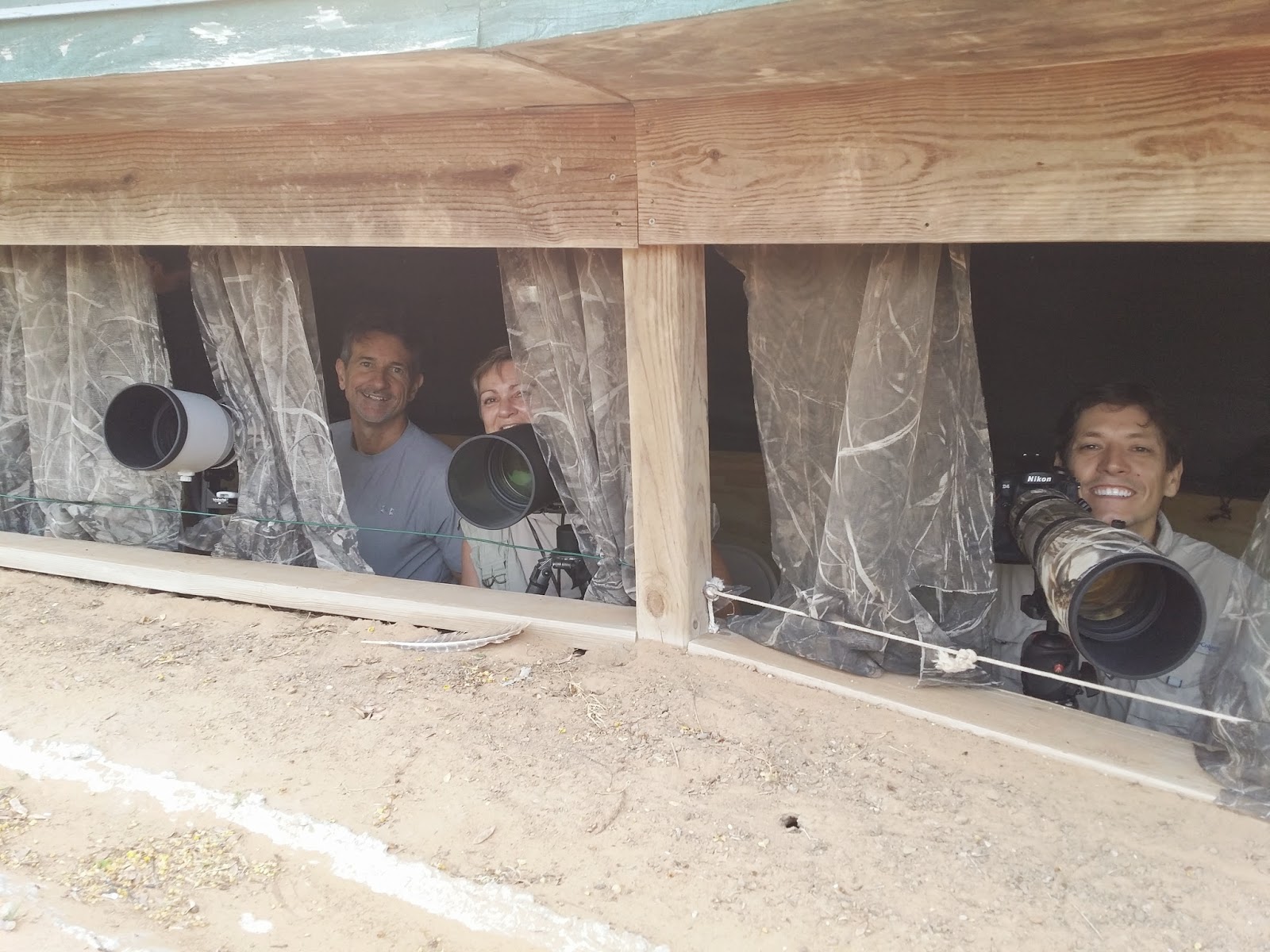 Inside one of the blinds 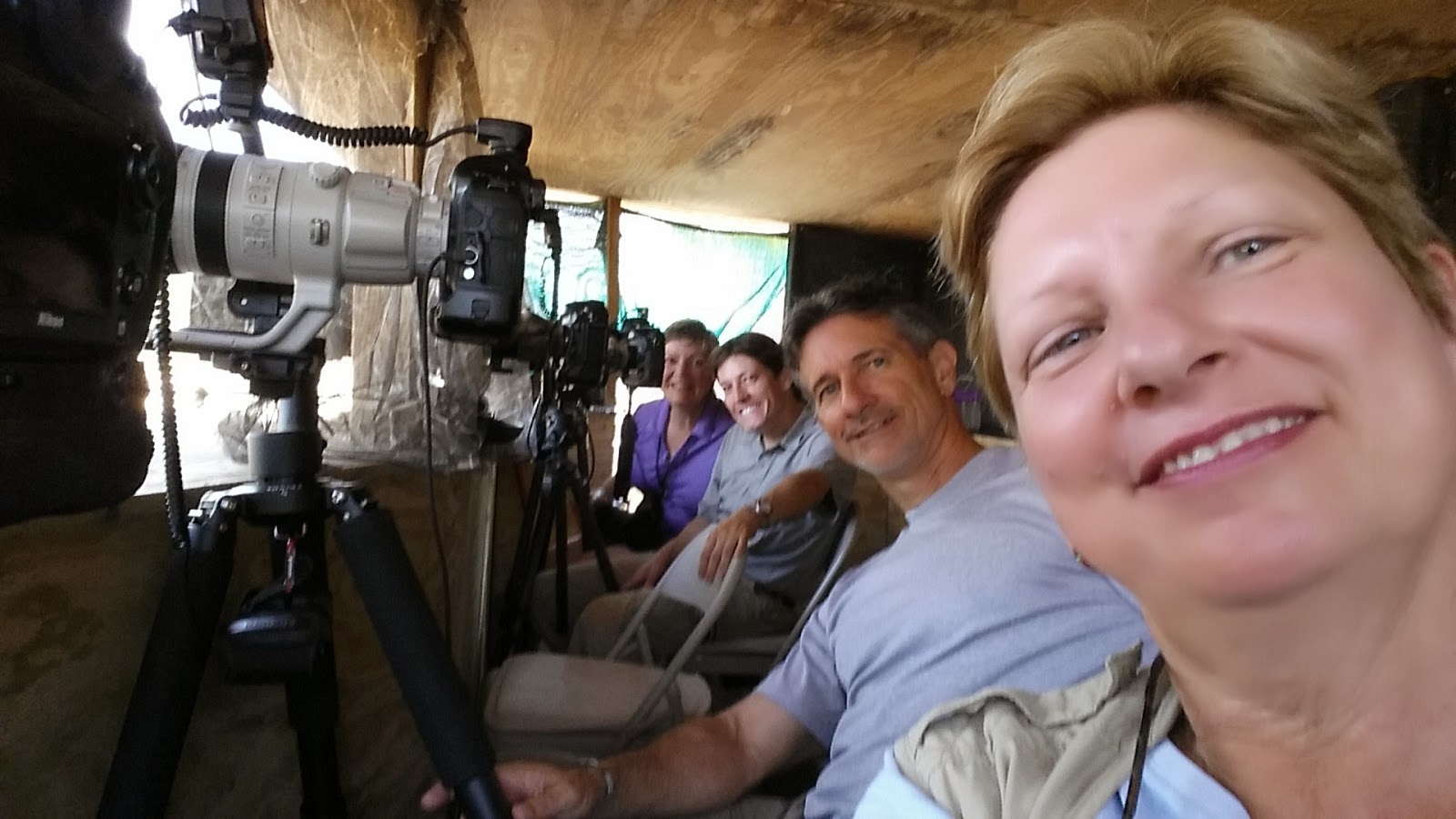 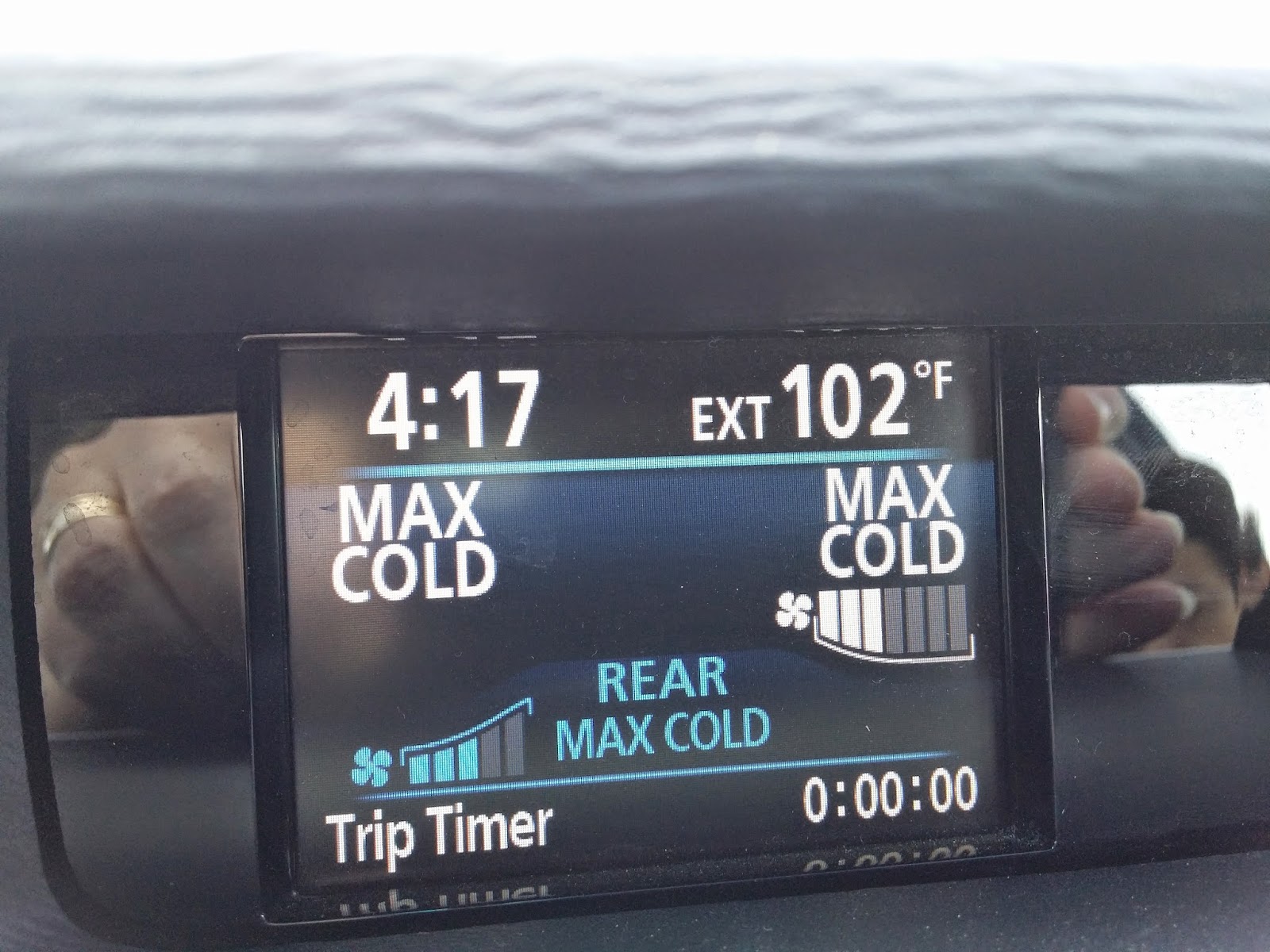 BUT, the activity was well worth it.  From within minutes of arriving to the blinds we would have subjects to aim our cameras.  And, over the next few days we would not be disappointed.  What we did find out, unlike in May when we saw plenty of raptors, this time of year, most are on nests.  Their activity was way down, but all others way up. 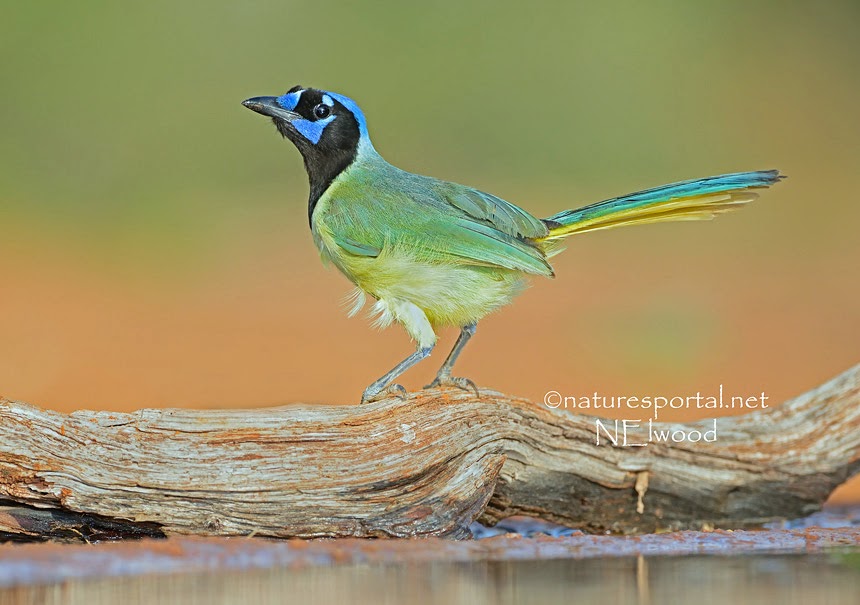 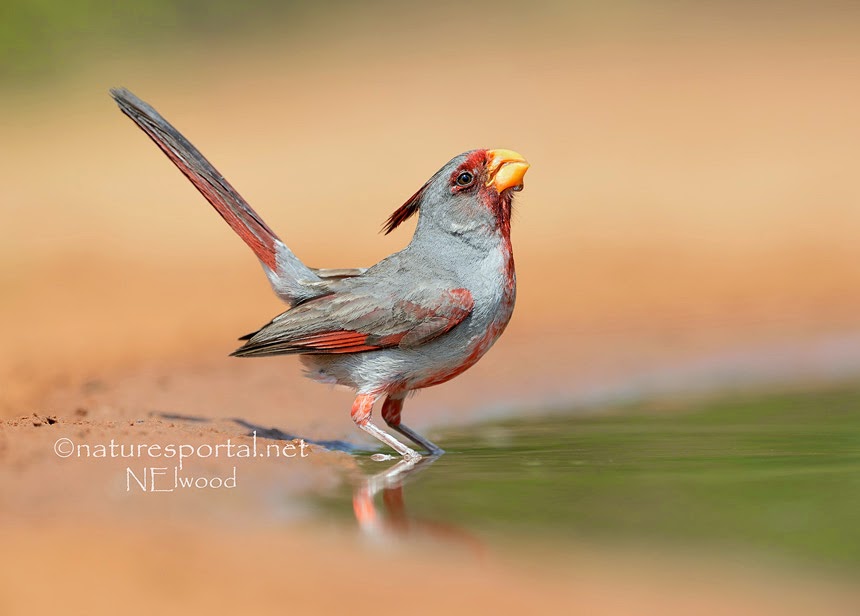 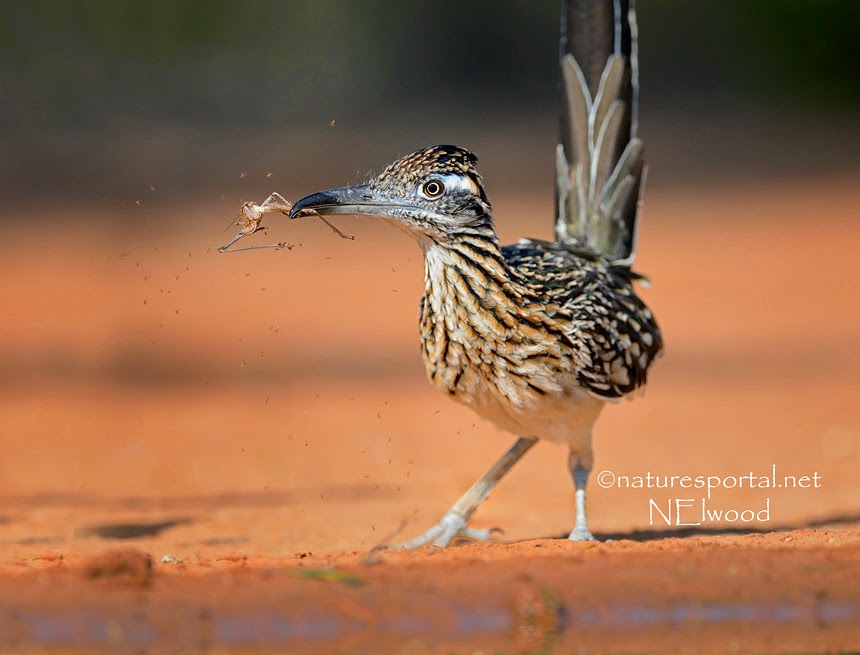 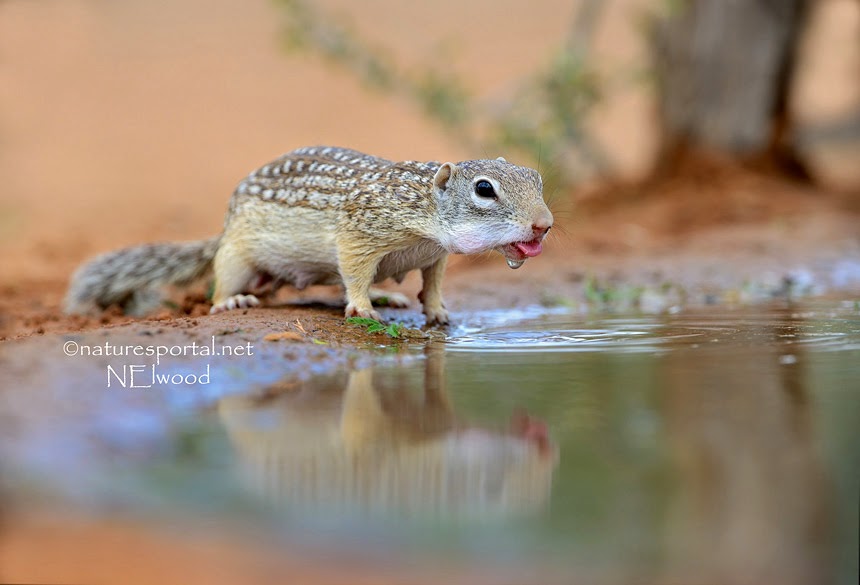 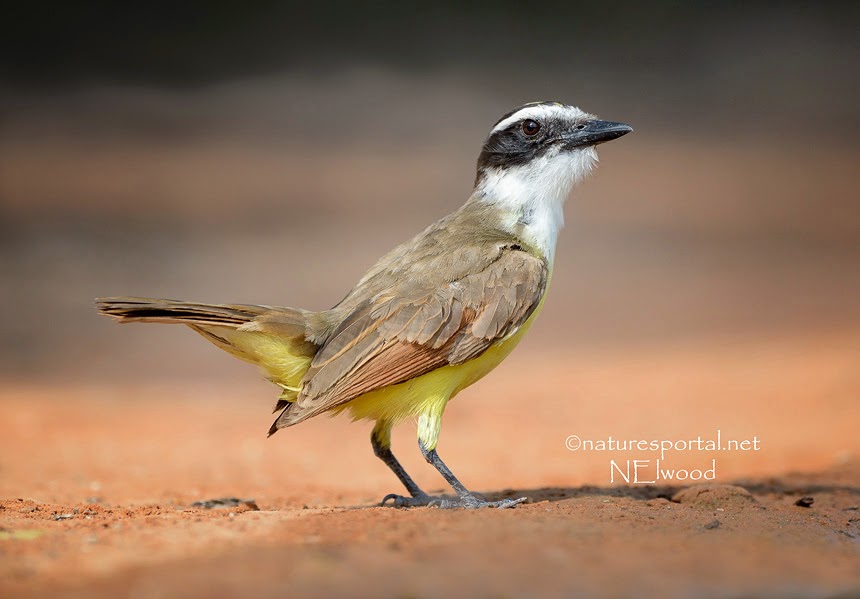 After three nights and three and half terrific days, we said goodbye to the Santa Clara Ranch and our wonderful guide Hector.

We drove to Edinburg for the night. That is where we would be staying for our visits to the Laguna Seca Ranch.  That ranch is about 25 minutes drive from Edinburg.  Edinburg is twelve miles north of McAllan.  I contacted Ruth and arranged our meeting her at the gate of the ranch 6:30 am the following morning, Wednesday, June 11th.  We stayed at the Best Western in Edinburg for the four nights.  Very reasonable, clean and safe.  Now, as the Santa Clara Ranch had more intimate surrounds for its blinds and waterholes, the Laguna Seca Ranch was more open, for the property was formerly pasture type land. Ruth met us at the gate, showed us around, we picked a blind, and again the action began soon after.  Again, as with Hector, Ruth asked us about perches, where we wanted them set up and how they looked from our positions in the blind as she set them up.  We could help as much or as little as we wanted.

Eloy helping Ruth at one of the blinds 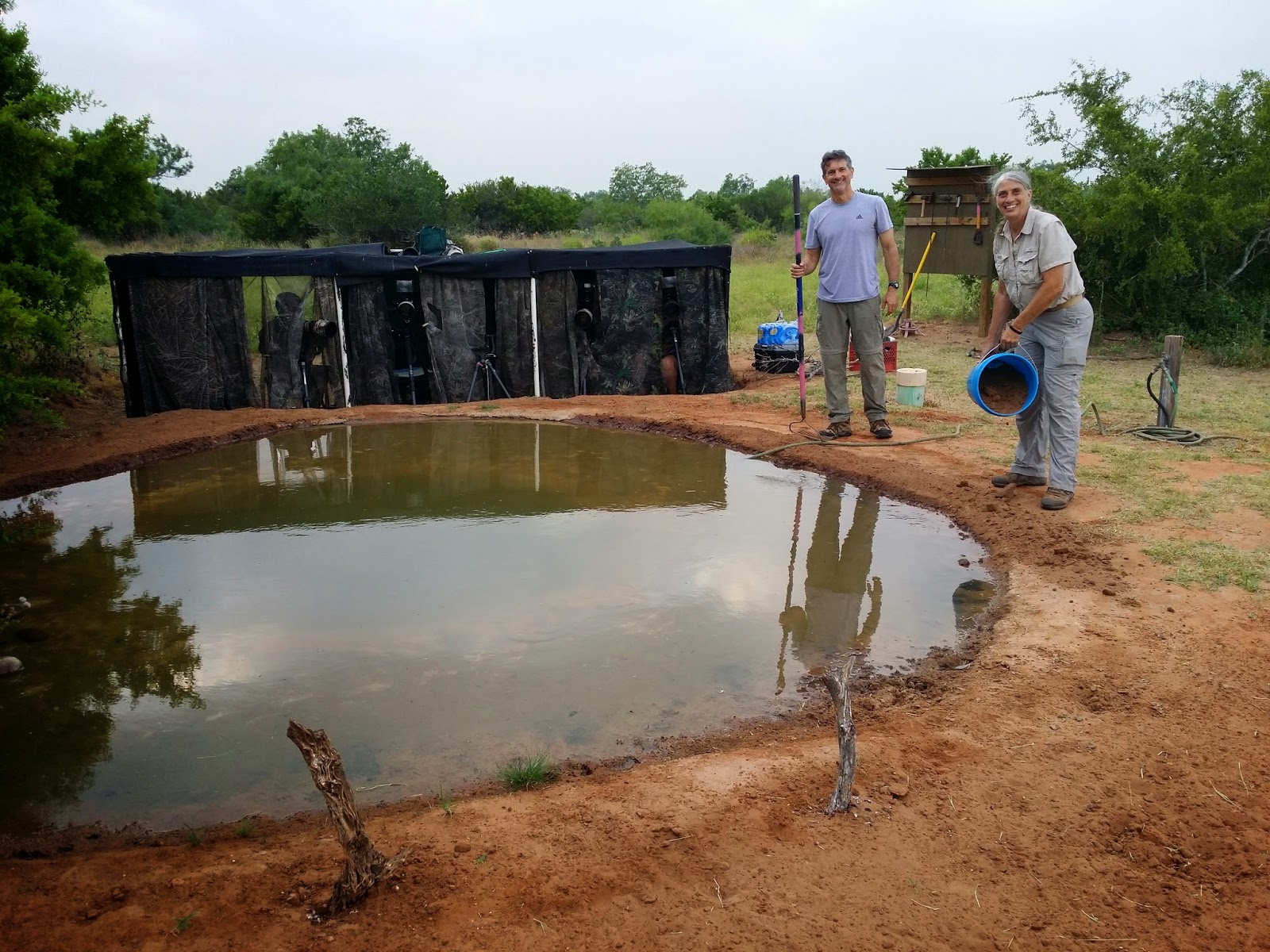 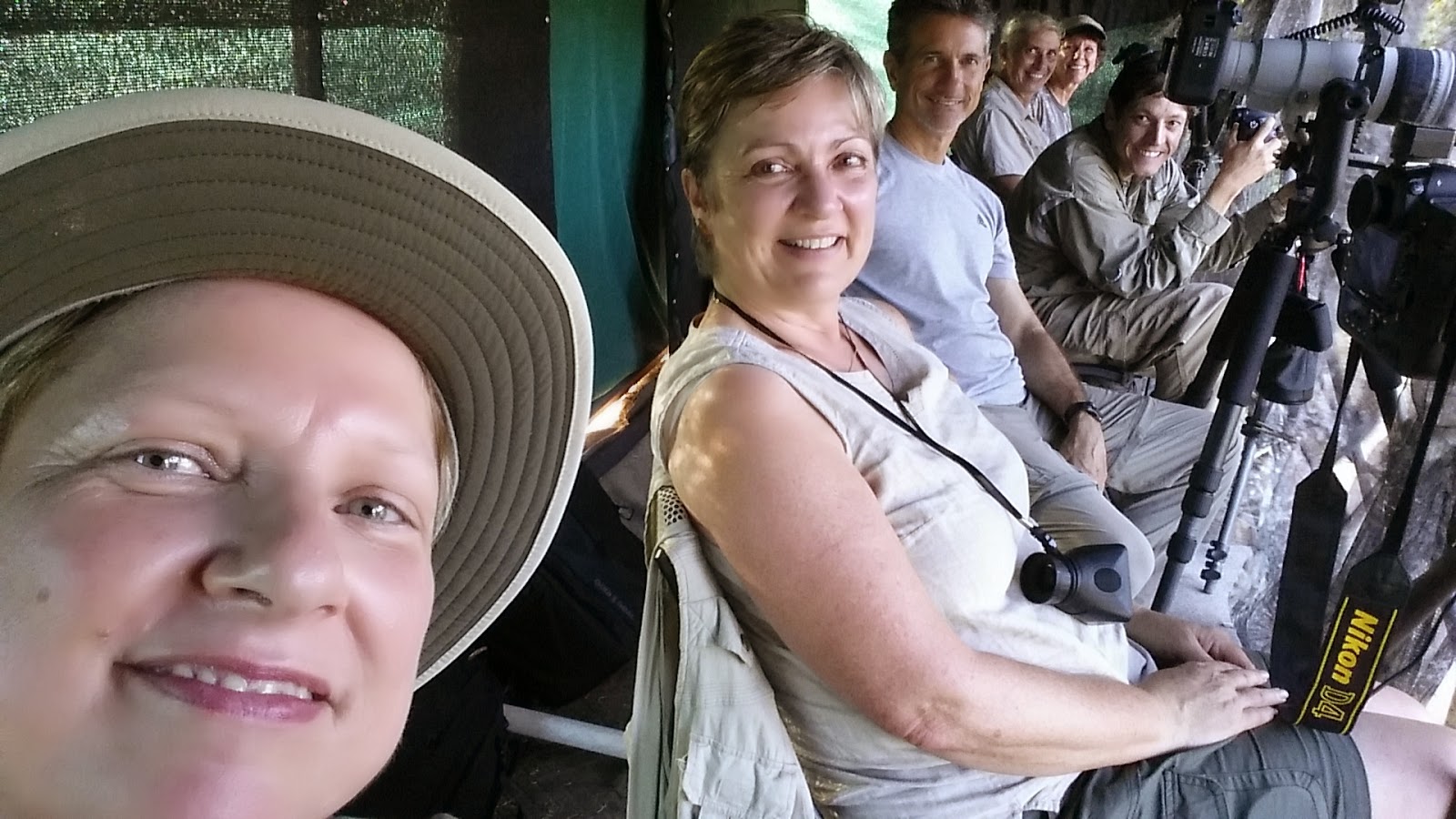 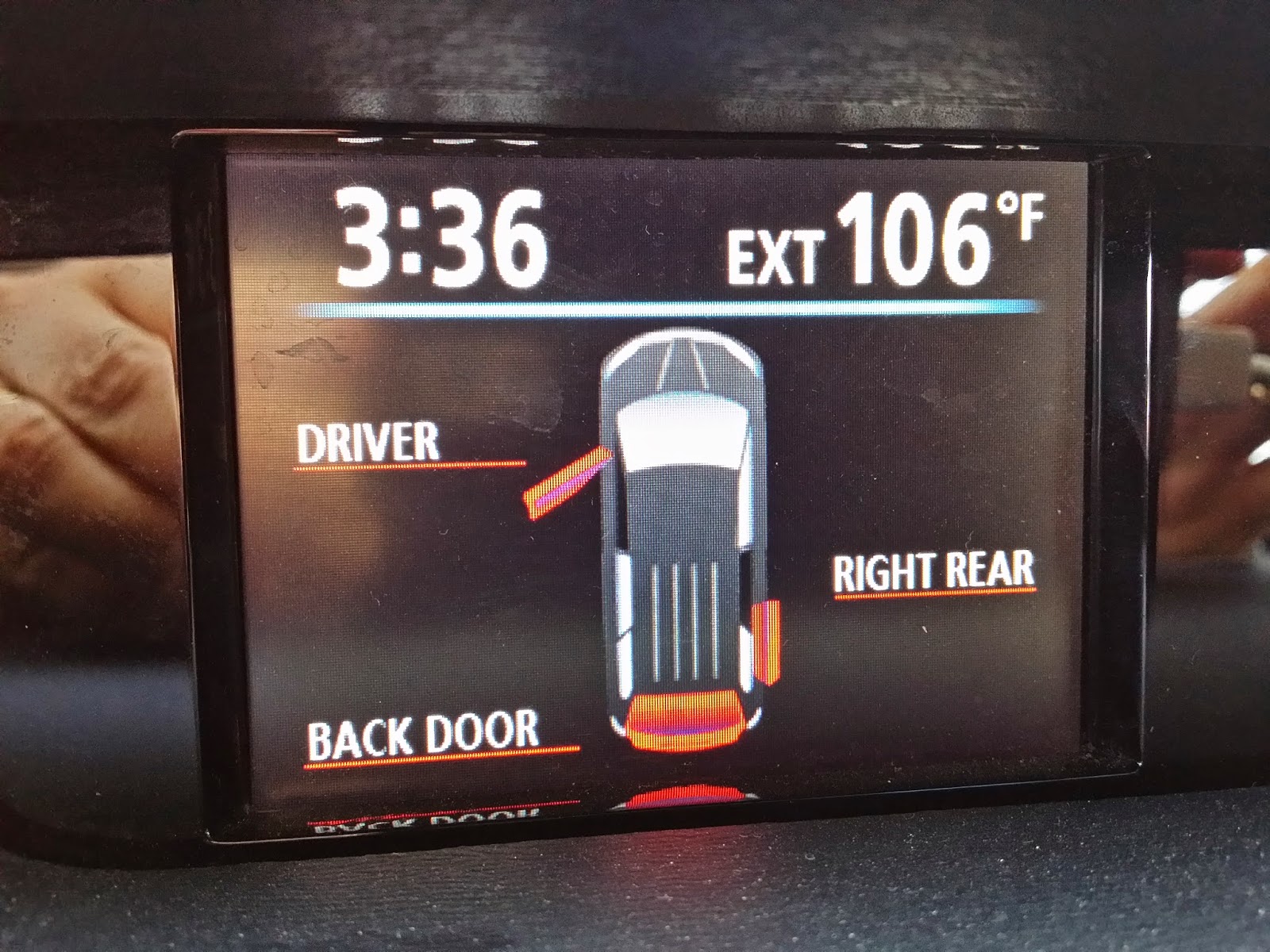 But, again the heat brought out the wildlife.  During each session Ruth would change up the perches, so your look would be different through out your visit to the ranch.  The cooler was kept full of water, and if you kept drinking, all was good.  About 10:30 am to 11:00 am each day we would break, drive back to the Edinburg, eat, rest, and download. We would meet back at the ranch at around 4:00 pm and stay till the light was gone. 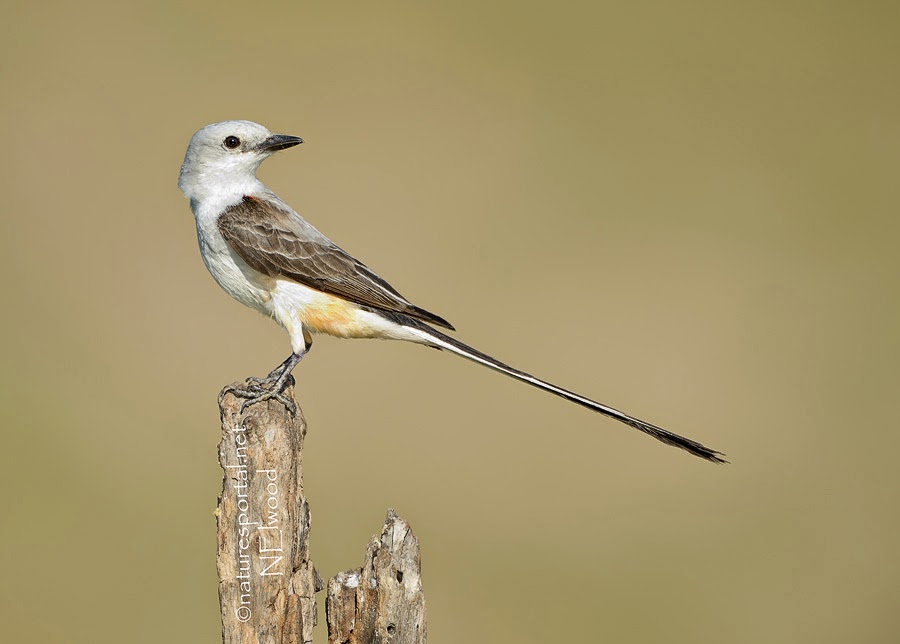 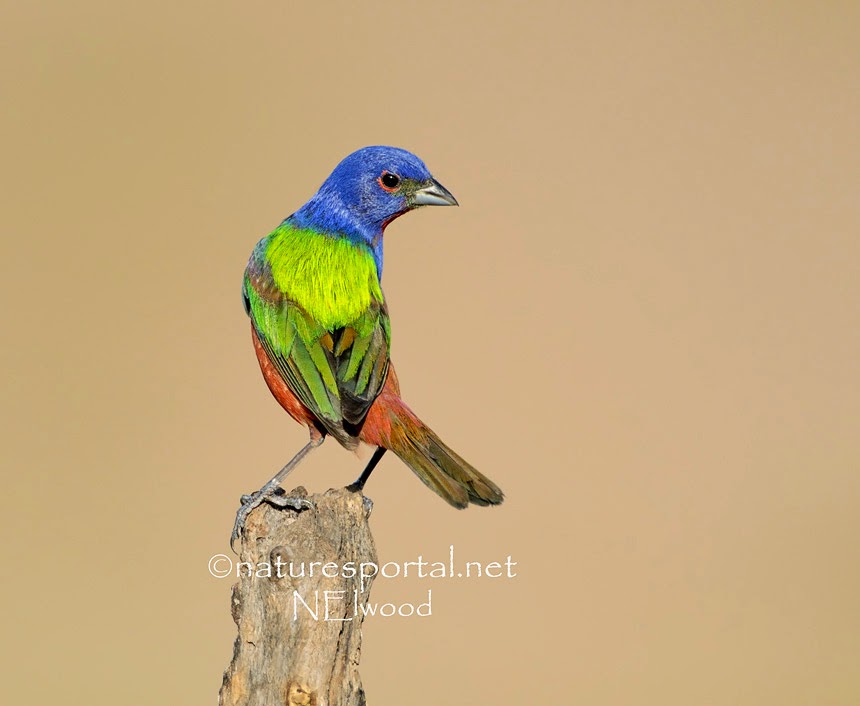 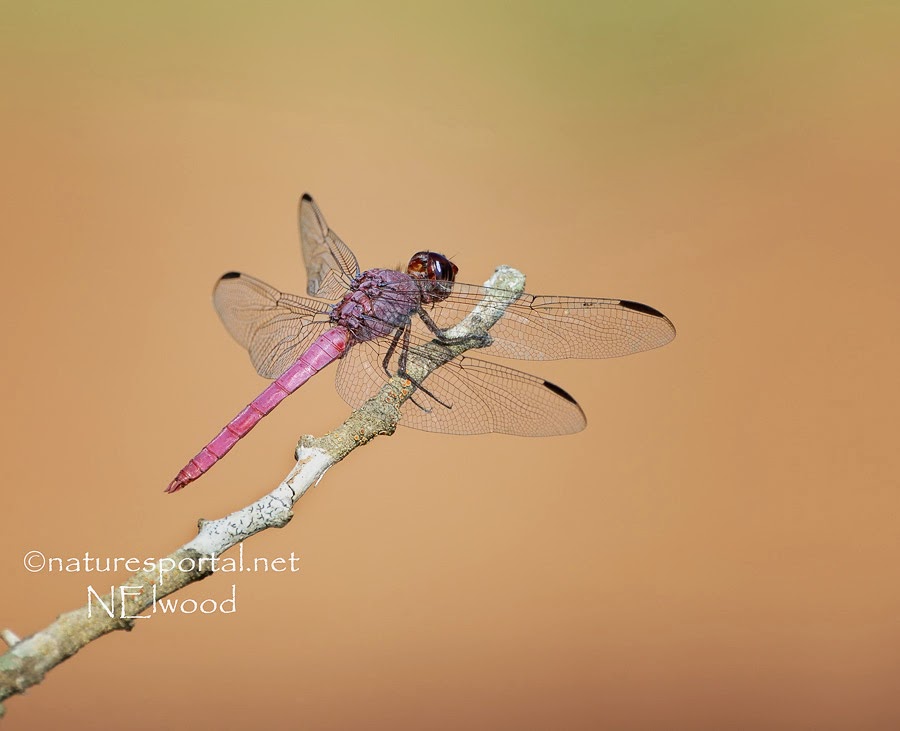 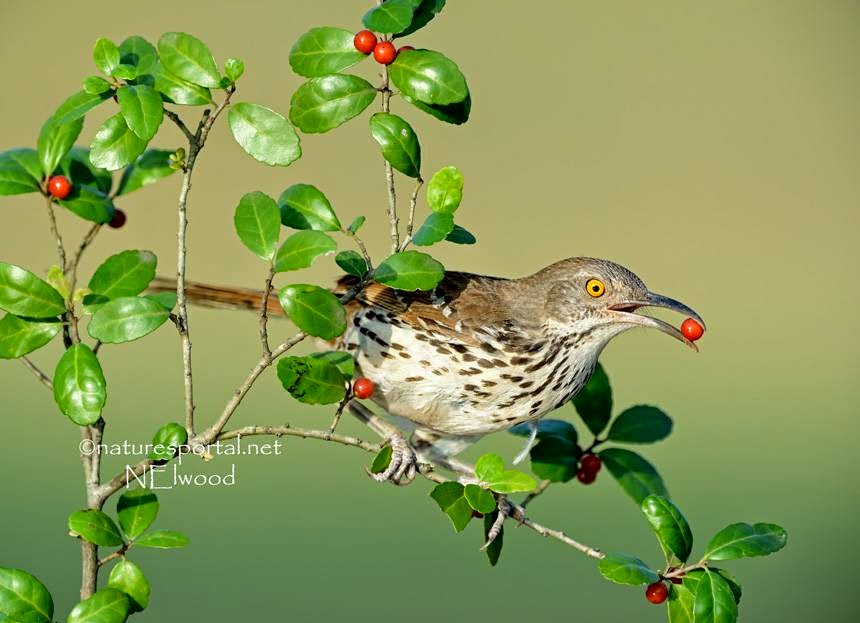 We departed the Laguna Seca Ranch Friday the 13th as the sun set, for the last time. Many thanks to Ruth for an awesome experience.  Ruth is also a wonderful photographer in her own right.  We spend the night back in Edinburg and drove to McAllen early the next morning for our flights home.  All saying that another visit was definitely needed to this area. We also found out that the Martin Ranch will close after this year.

Cost per person for the week, including flights, food, ranch fees, guide fees, rental car and accommodations was around $2500.00.  Three of us used American Airlines from Dallas to McAllen.  We had a full size jet, so no problems with carry on space.  United Airlines from Houston tend to use the smaller commuter jets, which can be a problem with carry on camera packs.  In the past,  I have not had issues hand checking my pack at the airplane, always making sure I am right there at the bottom of the stairs as they unload.

Below are links of interest for the ranches and our guides Hector and Ruth.

My website, where you can view more of my images from my several visits to south Texas and more (I am updating daily with images from this last trip)
www.naturesportal.net

The Laguna Seca Ranch
http://www.lagunasecaranch.com/
Posted by Unknown at 8:20 AM

Welcome to my world

I have a great passion for nature and capturing its wonderous moments through my camera lens.Please visit me at www.naturesportal.net to view my work. My email is naturesportal@gmail.com .